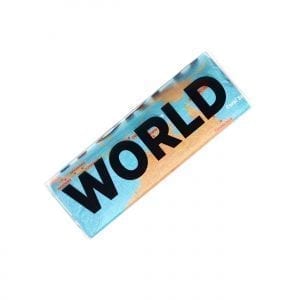 View cart “Crumpled World Map with City names” has been added to your cart.

History painter and portrait painter, Yan Pei-Ming was invited in 2009 by the Louvre Museum to dialogue with the collection, in the heart of the painting department, Salon Denon. He chose to work on the world’s most famous masterpiece, the Mona Lisa, which he reappropriated, probing the icon and paying tribute to Western painting. Yan Pei-Ming then proposed a huge polyptych and brought together the Mona Lisa, his father’s portrait and the artist’s self-portrait in the morgue.

The artist, who works mainly in series and in two-colour printing – grey and white, black and white or red and white – and whose technique has often been compared for its precision and dazzling precision to that of the samurai, presents a figurative and monumental work.

Born in 1960 in Shanghai, Yan Pei-Ming is a propaganda painter under Mao’s People’s China. A graduate of the Ecole Nationale Supérieure des Beaux-Arts in Dijon, he studied from 1988 and 1989 at the Institut des Hautes Etudes en Arts Plastiques in Paris under the direction of Pontus Hulten. From 1993 to 1994, he was a resident at the Villa Médicis, at the Académie de France in Rome

After having made several lithographs, Yan Pei-Ming made his first engraving for the Louvre. It is a self-portrait with long hair, half-woman, half Indian, drawn with finesse, based on the contrasts of black and white, his two favourite colours.