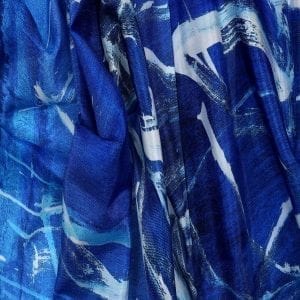 Like ancient Greece, ancient China was fascinated by the horse. As early as the Chang Dynasty (17th -11th century B.C.), it accompanied sovereigns to their funerary palaces.

It was then buried in numbers in order to create a procession. Under the Qhou Dynasty (10th – 3rd century B.C.), the appeared in a team harnessed to chariots with two wheels. Often harnessed with ornaments of precious metals, it was only exceptionally shown as such. It was not until the Qin and the Han Dynasties (221 B.C. – 220 A.D.) that it was often represented in this manner.

The little bronze from the Musée National des Arts Asiatiques-Guimet belongs to this lot of pieces dating from the end of the Qhou Dynasty.

Its daring schematisation reinforce the expressionist effect of this impetuous steed. It appears tamed, its banded muscles hardly hiding its strong and bony build. Its taut spine holds a strange and stylised head which transform the animal into a sort of fantastic creature.

Material of the original